The Latest in Prosthetic Liners

That growing history doesn’t mean the innovation is over, however. In reality, new interface designs are coming to market at a rapid pace, giving prosthetic patients new possibilities for comfort, function, prosthetic endurance and quality of life.

Also new is a liner designed specifically for upper-extremity applications. Previously, liners prescribed for upper-limb amputees were in reality lower-limb products of an appropriate size for the patient’s residual arm. The Alpha® Upper-Extremity Liner retains the attributes of its lower-limb cousin but features a unique oval-shaped umbrella that better matches the upper-limb shape and allows for a more comfortable fit. It is available in three prefabricated sizes as well as custom versions for challenging limb shapes and conditions.

A custom liner most always gives amputees the best fit and performance and is particularly recommended for limbs with sharp or irregular contours, a high level of sensitivity, and/or significant scarring.

The central ingredient of custom liners may be silicone, urethane or thermoplastic elastomer; each offers specific properties and advantages, which are evaluated by our prosthetic team in relation to each patient’s needs.

More and more liners are being provided with an outer fabric layer, which serves to facilitate the donning process and extend the life of the liner. 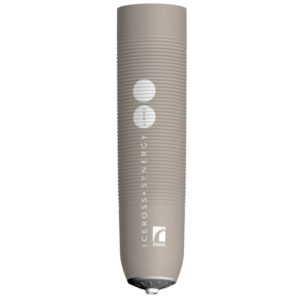 Another significant new advancement in interface technology is the Iceross Synergy, a liner incorporating two distinct silicone gel layers—a soft inner layer designed to soothe and protect the residual limb and a firm outer layer to maintain liner stability during active wear. This product also features a reinforced fabric built into the distal end to provide additional protection to the end of the residual limb and limit longitudinal stretching and therefore undesirable liner movement on the residual limb (pistoning).

An optional feature of the Synergy liner is a new type of outer covering called the Wave feature, designed to make the liner easier to bend at the knee for transtibial amputees and thereby better able to adapt to the wearer’s movements. During knee flexion, Wave liners exhibit less bunching at the knee posterior and more elasticity anteriorly and posteriorly, which combine to deliver greater freedom of movement.

A final development worth noting is the creation of creation of conical liners for transfemoral amputees. By more closely confirming to the anatomy of patients with a distinctly conical residual limb shape, these liners may eliminate the need for auxiliary belts, straps and/or suspension sleeves.

Please call us today for your initial consultation. Our clinics are located in Beaumont, Nederland and Jasper, Texas.